Well, I finally got to the end of that ham I prepared the other day. Not wanting to waste a drop, I decided to make ham stock last night to use for my dinner tonight.

I started by cutting away the outer fat from the ham. It was a shank portion so there was quite a bit of meat there just really marbled with fat.

Next, I put the ham in a large pot, and covered it with water. To that I added about 10 black pepper corns, two pinches of celery seed and four bay leaves. When water began to boil I reduced the heat to simmer and cooked until the remaining ham was falling away from the bones. After cooling, I trimmed away more of the fat, removed the bay leaves, transferred to a bowl, and refrigerated for today's use.


I used the quick soak method for preparing the beans. For each cup of beans add 3 cups of water. One pound of beans = two cups. Slowly bring to boil and boil gently for 2 minutes. Remove from heat, cover and let stand 1 hour. Discard all liquid and rinse both beans and pot.
Return beans to pot and add 1 cup water and begin heating. Meanwhile, I removed the bowl from the fridge and skimmed off all the solid fat from the stock. I added jellied stock to beans a few spoonfuls at a time allowing it to heat and liquefy, until beans were covered by about an inch. To the broth I added the ham, onion, garlic, and all of the seasonings. I simmered the beans for about 30 minutes and then added the tomatoes without any liquid, and continued to cook for another 30 minutes. 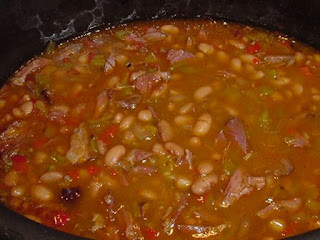 I served these over yellow rice, with a side of corn bread... Spicy and good!

Sara said…
That looks so good! Yummy!
You have the Lemondae award waiting for you at my site,
Congrats!
Sara
http://www.thebreathingpost.com/
January 31, 2009 at 12:22 PM

Anonymous said…
Hey, it is much delicious chicken recipe. The recipe known by us as "Bone less chicken recipe". Thanks for sharing it, it is very useful.

Anonymous said…
Yes! I am hungry! With your delicious recipes, everyone will feel hungry.
February 4, 2009 at 11:24 PM