My niece and god daughter is being confirmed this weekend. To look at her, many would probably never peg her for a Christian. You see she looks like lots of the teens today. Black finger nails, dark eyeliner, kinda goth, and kinda metal. You see I was a youth leader for many years and have witnessed "first hand" what judgmental thoughts are passed on these kids. It was her choice to be confirmed, and I am so proud of her!

So what does my niece have to do with Stromboli? I believe it is my responsibility as a God mother to make her confirmation day special. Even though the tough economic times have hit on most of our family, I figure I can whip up a few quick Stromboli for about twenty bucks or so. Have family bring a dish, invite a few of her close friends, and give her the day she deserves. Well it maybe not that big but with that much love!

For the dough, I will purchase a three pack of white bread dough. Of course, you can make homemade dough. This is my favorite bread machine pizza dough, great for stromboli too! Stuffing will include 1 lb. cooked salami, 1 lb provolone cheese, 1.5 lbs. cheap deli ham, 1 can black olives, 1 large onion, 1 8 oz. container of Parmesan cheese, hot pepper rings, and 1 lb shredded mozzarella cheese. Wal-Mart has the best deals on lunch meats and canned goods while BJ's has the best prices for cheese.


Now that the shopping is done, let's make Stromboli.

First place frozen dough in a loaf pan, and cover with clean kitchen cloth OR spray with cooking spray and cover with plastic wrap. Let dough rise for 4 to 7 Hours, until dough is 1" above pan. Actual time depends on the temperature of your kitchen. Remove the towel/plastic. Next preheat oven to 400F. 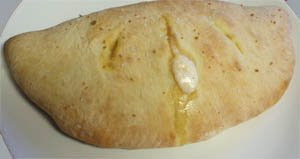 Lightly flour a clean counter surface. Push down on a risen dough, then remove from pan, and knead into a ball in your hands. Roll dough in flour so that it will not stick to surface. Flatten dough with finger tips, pushing and pulling top to bottom to make an oblong shape. Roll with a rolling pin to about 1/8" thick. Sprinkle more flour as needed if dough begins to stick. Next, sprinkle Parmesan cheese on floured surface. Flip dough on both sides, in cheese.

On half of the dough, place 1 layer of provolone cheese and then 1 layer of each meat. Top with onions, peppers, and olives. Cover with shredded mozzarella. Fold dough over the stuffing, pinch edges to seal. Some prefer to center stuffing, fold one side and roll to close. I don't use this method because I have found the dough cooks more even when using such heavy stuffing. 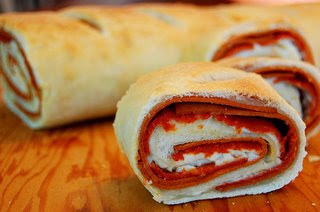 On the other hand, if I were using only pepperoni and cheese (which I call pepperoni bread, not stromboli) I would use the rolling method to close the dough. Make two or three small cuts in top of Stromboli to release steam. I bake these on a pizza stone, but have used a cookie sheet. Bake 25- 35 minutes, until dough is golden brown.

Anonymous said…
Ur bread (may it be called that ?) recipes here r inspirational to me ! I do envy the ease to which u could obtain those yum ingredients ! The dutch prefers the taste of their own kind of cheeses, therefore italian cheeses r sold in specialty shops charging high prices.

Actually I was abt to embark on a trip to stock up frozen pizza's to save time during the week when I hv no energy to cook after a long day. Yes, I can u see shaking ur head in dismay at those cardboard food :-( I would like to give ur recipes a try since I hv never use bread dough b4 as hubby is very fond of thin crispy crust. Even for the Calzoni I had to use a home-made thin pastry instead of a thick fuffy dough which is more to my liking ;-p.

Gregorio said…
Great article I like the way you wove the tail from confession to frugal places to purchase ingredients.I also really like the looks of that strombolli.
February 21, 2009 at 11:24 AM

Anonymous said…
Delicious! What a great recipe! Hope you can come over and share this yummy treat over at Foodista.com - the cooking encyclopedia everyone can edit. Would also love a link to this post from our site.(This will direct Foodista readers to your blog)Here's how you can create inbound links from our site Check it out here. This is a great way for you to build blog traffic and connect with other food lovers! See you there! Thanks!
February 22, 2009 at 11:05 AM

oregonphotography said…
Your Stromboli looks and sounds like fun. I am not Italian, but I love Italian food. Put you in my favorites, so I 'll be back. Best to you!

Martha A. Cheves said…
You cook like I do.. as inexpensively as possible but still serving a wonderful dish. I'm going to try this with the Pillsbury Crescent Recipe Creations. I really think it will work. The crust will be a little flaky but I bet it will be good. It might even work with something like Pillsbury thin pizza crust. I'll let you know how it comes out.
Thanks
Martha
April 25, 2009 at 11:49 AM

Redkathy said…
Martha, I've used ready made crust. I even bought several pizza doughs from a local pizza shop. I was in a pinch, had unexpected company show up. Will be interested to know how the crescent rolls work.
April 25, 2009 at 5:01 PM