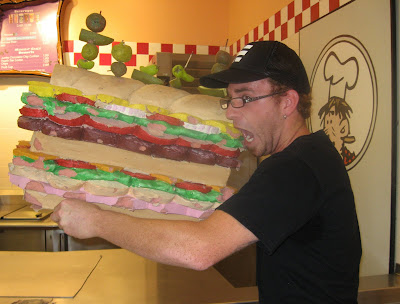 
Dagwood Sandwich - It is a multi-layered sandwich with a variety of fillings. Used to denote a sandwich put together so as to attain such a tremendous size and infinite variety of contents as to stun the imagination, sight, and stomach of all but the original maker.

Dagwood sandwiches, a term so well-known it made Webster's New World Dictionary.

1930 - A term that originated in the comic strips in the 1930s after a comic strip character named Dagwood Bumstead, a character in the "Blondie" comic strip.

According to the creator of the comic strip, Murat Bernard “Chic” Young (1901-1973), the only thing that Dagwood could prepare in the kitchen was a mountainous pile of dissimilar leftovers precariously arranged between two slices of bread. Dagwood became know for his huge sandwiches he created on evening forays to the refrigerator.

The comic strip is produced today under the direction of the creator's son, Dean Young, the strip has continued to keep up with the times.

Redkathy said…
Melissa it was a foam display on the service counter. It was huge!! The cook was laughing at us.
September 20, 2009 at 5:54 PM

Jen said…
My ex used to make sandwiches like that, he probably still does. They were enormous and caused considerable gas that I had to suffer through during the night, from him not me.
September 20, 2009 at 6:41 PM

Jude said…
Dagwood use to crack me up with his humongous sandwiches and no way would I ever attempt one of them. Looks like you guys had a fun time.
September 21, 2009 at 12:22 PM

Redkathy said…
Joan - I wish I would have gotten the cook's expression looking across at Red. She almost lost it. It was really hilarious. I'm sure that would have taken away any disappointments!
September 21, 2009 at 12:58 PM

James | Postcard Printing said…
You can't get hungry for that kind of sandwich. Dagwood sandwiches that was the best! I can't wait to taste one.
September 21, 2009 at 7:29 PM

Gera@SweetsFoodsBlog said…
A funny photo but sometimes I want that this pic were real, especially when I'm starving!