I had NO idea how easy it it to prepare homemade applesauce. My mother made everything from scratch, noodles, dumplings, spaghetti, dressing, pies, cookies, candy, and cakes but not applesauce. We ate applesauce with dinner, and it was always served with pork chops.... I'm stumped .

Anyhow, I was reading this great post at Cookin' Canuck about their families home made applesauce and thought about the three bags of apples I had in the fridge. This was a slow cooker applesauce recipe. What happened next you might not believe, it's going to sound like a lie but I promise it is not. My part time daughter Erika (she live with me when she was a teen thus the title) stopped by to give me a new crock pot! See she had borrowed mine some time ago and hadn't returned it. Her reasoning, "Kathy that thing is ancient and a hazard so I decided I would return it along with a new one too! Look, the new one has the removable pot and it's red!" Don't you just love it when life exposes the fruits of parental labor!

Oh gosh enough babbling, on with the applesauce! I made the first batch in the new red crock pot. (I used what I had which was half red delicious and half green granny smith apples)


Place all of the apple pieces in a large bowl and stir in sugar and ground cinnamon. Pour water or apple juice into the bottom of a large crock pot (slow cooker) and add the apple mixture. Cover, turn the crock pot setting to Low, and cook for about 8 hours (or on High for 5 hours), stirring occasionally.


I set my NEW cooker on high, I just couldn't wait the eight hours. Red and I ate the entire bowl that night. Oh my, this applesauce was so fabulous, we are both addicted. Red shot this photo for me before we dug in. I think he knew it would be gone right quick after experiencing that wonderful aroma all afternoon. 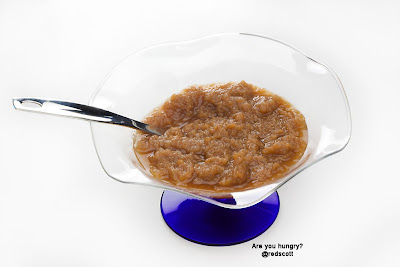 I made another batch a few days later. This addiction produced a level of impatience that forced a stove top method. This time I used 4 pears, 6 apples, and a half cup raisins. I increased the liquid to 1/2 cup and followed the same mixing instructions. Cooked this on low for about an hour total, adding the raisins at about 30 minutes. I gently mashed the fruit with a fork and served it warm. Oh wow this was really good too!

I'm wondering how many times I'll have to make home made applesauce before we're cured of this addiction!

SmartShopIt said…
I have a stomach virus and am living on a BRAT diet (bread, rice, applesauce and tea). I will have to make this as the bottled stuff just doesn't taste great. Thanks for showing how easy it is!

Find Smart Buy prices, product comparisons, nutritional information and coupons at SmartShopIt.com for your favorite apple.
November 7, 2009 at 1:00 AM

Unknown said…
I'll have to try this! I haven't made applesauce for a long time. The Granny Smith apples probably added a nice tartness, but the apple-pear blend sounds good, too.
November 7, 2009 at 10:20 AM

Reeni said…
I really love applesauce too! I put it in my oatmeal with cinnamon. I bet home-made is really delicious! Love the combo with pears. And how convenient to make it in the crock pot.
November 7, 2009 at 6:31 PM

Foodie with Little Thyme! said…
I made applesauce all the time when my son was a baby. You have inspired me to get back to making it! Thanks for the inspiration!
November 7, 2009 at 11:25 PM

Sara said…
I will have to try this reciepe. My mom's reciepe is a lot harder. Every fall my mom would have us girls come in and use the apple griner, it was so tiring, but worth it when we would see all the jars of applesauce and get big bowls of it:)
Have a great day
Sara
November 10, 2009 at 9:55 AM

jude8753 said…
I've never even thought about making applesauce, but after reading this post I may just have to try it myself, looks yummy.
November 10, 2009 at 12:12 PM

Sophie Sportende Foodie said…
I so love home made apple & pears sauce & yours sounds so good!

Unknown said…
I love the way you moved on from an applesauce newbie to an expert, adding other fruits and other goodies. Share any more ideas you have.

We used to have a small orchard in our first home and we had an apple tree. I had loads of apples from that tree so I learned how to make apple sauce and after that, we didn't like the bottled kind. I haven't done this in years but I have a crockpot and no good excuse not to..........so apples beware.
November 15, 2009 at 1:11 AM