Seasfood and Pasta, Our Italian Tradition

The Christmas Eve cooking has begun! Started soaking the baccala last night. Before I go totally MIA, I would like to share my Christmas Eve Seven Fishes story and menu with you.

I was left to carry on my mother's family tradition. You see, the family believes that I am the one who cherishes most the family and it's traditions. For example, when my Uncle Chico passed in 1995, he left an old RCA floor model radio, built in the 1920s, to my brother. Bob, who was a Marine Corp. career man stationed in Korea at the time and since retired, told my mother when he was informed of the inheritance, "No ma don't keep it for me, I'm not going to appreciate it as much Kathy, pass it on to her." I can still hear my mother reciting what my brother said. Yep, that old radio proudly sits in my living room today. Thought a glimpse of how our family rolls was in order, on to my Christmas Eve story.
(That's Bob serving up the red sauce the back in the day)

When I was a child every year we went to my Grandmas house for Christmas Eve dinner before mass. There was fried smelts, Baccala salad, spaghetti with anchovies (Spaghetti con Acciughe), Calamari marinara, and baked fish with lemon, all of which were her "standard dishes". She served a few others of which I have no idea what they were called. There would be eel one time, spaghetti with clams another, and octopus too along with a stuffed calamari. Everything was home made, including the pasta and the bread. Desserts included rum balls, pizzelles, sesame cookies, and a wide array of fruit filled cookies. I remember some sort of almond candy too. Oh and I almost forgot, the spinach pie... Spinach, anchovy, and raisin filled goodness! My great Aunts described my grandmother's cooking as exquisite, and the best of all the family! When she got up in years, my mother began preparing the Christmas Eve meals.

Since moving to Florida in the early 1980s, every Christmas my parents would come and stay at our house. Together my mother and I prepared Christmas Eve dinner. Even when l they too moved to Florida this continued. By the early 90s, my grandmother had passed and most of family had moved out of Pa. Some moved to the town I live in and the guest list started to look a lot home. Of course living here in Florida alone for some time, I forged friendships that I consider to be family. They too attended our Christmas Eve celebration. I can remember having up to fifty people in the house at times. My mother passed in October 1999 and I can tell you that was the hardest Christmas Eve dinner I ever had to prepare. The entire Florida family, while worn out by the ordeal and and sad at the loss, celebrated Christmas with great joy and thanks. 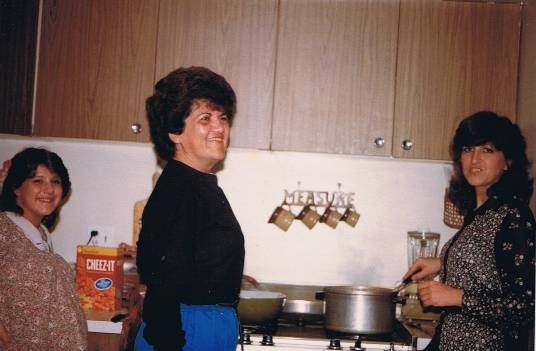 Of course they're in the kitchen!


And so our Christmas Eve tradition continues. It is my gift to the family until of course it's my turn to pass it on.


Now for our Christmas Eve menu:

Main Courses:
Clams and linguine (Linguine con le Vongole)
Fettuccine Alfredo with shrimp (this is my "standard dish" contribution to the tradition)
Baked fresh cod fish with lemon and capers
Baccala Salad
Calamari Marinara
Seafood Primavera (I found this at What's Cookin' Italian Style. Every year I serve a surprise dish and this one looked fabulous. Of course I won't be using the lobster as shown in this dish. It will include crab, shrimp, scallops, and scungilli.)

Baked Ziti with meat sauce is always served for those American spouses and friends!

Dessert is being prepared by cousin Anna Marie, the family "cookie baker". She will be bringing a huge assortment of Christmas favorites as always! Aunt Joan might just surprise us again this year with pizzelles. 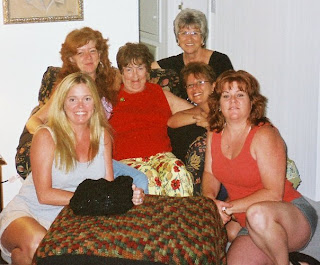 The girls in Florida just a few years ago. Aunt Joan is in the black shirt, and that redhead on the right is my baby sister. Boy I hope Aunt Joan brings those pizzelles!

Wishing you and yours a wonderful holiday season and a very Merry Christmas!

Mary | Deep South Dish said…
I loved everything about this post!!

FOODalogue said…
I related to a lot of this post...the Christmas Eve fish dinner, the passing on of traditions and, of course, Florida. Your menu sounds delicious and I know everyone around your table will have a wonderful meal.

Melissa said…
I thoroughly enjoyed reading about your family traditions. Thanks for sharing it, and Merry Christmas!
December 23, 2009 at 8:53 PM

Gera@SweetsFoodsBlog said…
What a beautiful and tasty menu for Christmas.

Merry Christmas and a Wonderful New Year 2010 for You!!

Catherine said…
This post brought back alot of memories. I wish you and your family a wonderful, blessed holiday season and a very happy new year!
December 24, 2009 at 12:53 PM

Whats Cookin Italian Style Cuisine said…
I am honored to be part of your post on this lovely feast. Thank you so much for inviting me as part of this heartwarming awesome family gathering.. may god bless you all and have a wonderful Buon Natale feast...and make many more wonderful new memories in 2010...thanks again....appreciate your mentioning me your spread sounds fabulous!
December 24, 2009 at 1:20 PM

Drick said…
Really loved reading of your family and esp you carrying on the tradition....there is nothing more special than memories such as these....glad to know you and Happy New Year.
December 25, 2009 at 7:58 PM

Roz | La Bella Vita Cucina said…
Oh Kathy, this is one of the best posts that I've read all year among all the blogs that I follow. So much to cherish in your family and in our Italian heritage. My family never followed this feast of the 7 fishes custom becaue we were from the mountains in the northern part of Italy. But I've read about it, watched it on Giada's show, and want to have this festive dinner in the future! I LOVE the photos of your family too! May you have a blessed Christmas season and a beautiful new year! Baci e' amore, Roz
December 25, 2009 at 11:51 PM

motherrimmy said…
What wonderful family traditions. So many happy memories, and the menu sounds terrific!
December 27, 2009 at 1:41 PM

Unknown said…
Since, we don't celebrate Christmas, I am in awe at the menus, I have been reading, definitely including yours. Yours is distinctive and classy. Seven fish - wow.

Unknown said…
Stopping by to wish you and yours a very Happy Holiday Season and a wonderful New Year! Fondly, Rosie
December 28, 2009 at 10:46 AM

cornyman said…
You make me HUNGRY :)
Belated Merry Christmas and a Happy New Year for you and your loved ones!
December 28, 2009 at 11:43 PM

Whats Cookin Italian Style Cuisine said…
My mention in your blog is truly appreciated, I can see the family values you all share are so similar to ours if not the exact same, that is a honor to be part of this lovely post and tradition. You have a lovely family history or tradition I absolutely love this so much as it is heart warming to see everyone together.. May the New Year be the best ever for all of you, again many thanks to you and have a safe and healthy new year... Garcie and Buon Natale Claudia
December 29, 2009 at 9:11 AM

Angie said…
What a great tradition! I loved your story. I am the one with most of the heirlooms too, my aunt and me split it up, but most ended up in my truck, cause she was toting it there! And now I feel weird about getting rid of it, she knew I would! Hope you had a wonderful Christmas!
December 29, 2009 at 10:35 AM

Reeni said…
That is so great that you are carrying on these traditions. Your memories are much like mine - my Grandparents made all kinds of fish and seafood - the smelts, clams and scungilli and things I don't remember because I wouldn't eat. But since they passed away we don't go all out now - we keep it much more simple. Your feast sounds amazing!
December 30, 2009 at 10:08 AM

Roz | La Bella Vita Cucina said…
Hi Kathy, I didn't see an email address to write to you directly, so I hope it is ok that I ask this in a comment: where are you located (generally) in Florida? My husband and I are in New Smyrna Beach for the week before we return to campus to teach for spring semester! Just want to give you a shout out to you wherever you are, my friend! I hope that your Christmas was lovely, and that you have a happy, happy new year! Love and hugs, Roz
December 30, 2009 at 4:45 PM

Thistlemoon said…
This is quite and amazing feast! Thanks for sharing your memories of Christmas Eve dinner! I can't believe how much we have in common - including PA AND FL! Have a great New Year, Kathy!
December 31, 2009 at 8:50 PM