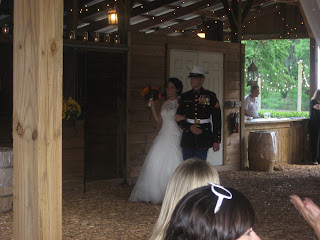 Grilled food, you all expected that right? We ate grilled food every day last week. Over the weekend, we attended two weddings. Our niece was married pool side on Saturday, and a very close friend of my son was married at a horse ranch on Sunday. We ate grilled food and pulled pork at both of those events!
Apples and pineapples are the first fruits I ever grilled and Oh boy, were they delicious. Red had a bottle of spiced rum in the cabinet. Remembering reading how others used wine and Jack Daniels in preparation for grilling fruits, I thought why not use the rum. Good choice!


Grilled Pork Chops:
I splashed low sodium soy sauce on both sides, rubbing before turning. Then I scattered liberally with Adobo seasoning and ground chipotle pepper, and rubbed. The pork chops marinated for about three hours. Just before grilling, I mixed half a cup of Kansas City BBQ sauce with half cup water for basting. Half way through the grilling process, the pork chops were lightly brushed with the KC BBQ sauce.

Grilled Pineapple
Mix one ounce of spiced rum with one tablespoon of brown sugar. Slice half of a pineapple about ¾ to one inch thick. Drop slices one at a time into the rum-sugar mix, coating both sides. Allow to rest for at least 30 minutes before grilling.

Grilled Cinnamon Apples
Mix one or two ounces of spiced rum with one and a half tablespoons of brown sugar. Core and slice three apples about one inch thick. Sprinkle generously with cinnamon, and add to the rum-sugar mix. Stir to coat completed and allow resting the same as the pineapple slices. 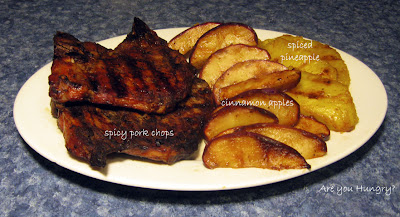 I was a bit nervous and thought the fruit would grill much faster than it did. Originally, the last burner was set to medium low. The fruit just did not seem to be grilling correctly so I upped the burner to medium. In all, the fruits took about thirty minutes to grill. I read in The Barbecue! Bible

that grilled food should be allowed to rest. That is some fine advice. I tasted one of the apples while setting the table. They were good. When we sat down and ate, the apples were extra flavorful. In all honesty, I thought they were fabulous! Red preferred the pineapples, but then again pineapple is one of his favorite fruit so his opinion is biased. Grilled meats are hubby’s favorite and he raved about those pork chops.