Pearled barley is one of those grains of which I have almost no experience. Of course, I have eaten soup with barley, if that can possibly be considered experience. Reading about the nutty flavor and chewy texture of barley heightened my curiosity big time. I was pleasantly surprised to find the pearled barley to be very economical, especially when compared to couscous or quinoa!

The original recipe from Taste of Home called for green onions and a can of mushrooms. I had neither. Using what I had on hand and adding a few more flavors, I came up with this side dish.
Pearled Barley & Onion Casserole
4 servings


In an ovenproof skillet or shallow pot, sauté pearled barley over medium low heat in oil until golden brown. Add garlic, cooking for a minute or two. Stir in chicken broth, and salt; bring to boil. Remove from the heat; add onions, celery and parsley. Cover and bake at 350 degrees for 40-50 minutes or until barley is tender and all liquid is absorbed. 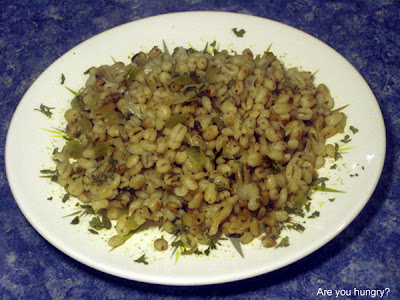 I really didn’t know what to expect this being my first time cooking barley. I must say it was very good. The nutty flavor of the barley with the onion and celery were a savory combination. The original recipe called for mushrooms and beef bullion. I think fresh mushrooms would have added a completely new characteristic of flavor to the dish. You can bet I’ll be picking some up next time.
I served this with steamed broccoli and my spicy chicken cutlets.