Nature's Pride 100% natural Oven Classics Oatmeal bread makes the best Pumpkin Bread Pudding, I gotta tell you! I received two varieties of Nature’s Pride Oven Classics bread, oatmeal, and honey wheat. The honey wheat is great for making both sweet and savory sandwiches just ask my family. The loaf was consumed in one day along with half of the Nutella and a pound of cheese. Made with whole grains and no artificial colors or flavors, the oatmeal bread has a soft, smooth texture. In fact, it was so soft that I lightly toasted the slices before preparing the pudding. Thanks to the Foodbuzz Tastemaker program for inspiring another delicious recipe.

After reading a ton of bread pudding recipes, I chose this one from kittencalskitchen at food.com. It called for pumpkin puree however, since I had two sugar baby pumpkins I used the fresh stuff! For the fresh pumpkin puree, first I split and cleaned the pumpkin. Into the microwave, they went in a covered casserole, adding about 1 inch of water first. In a 1000w microwave, they cooked up in just under 15 minutes. When cooled they peeled and mashed easily. One half looked a bit watery, so into the strainer it went to drain. Meanwhile I mashed the other half and began preparing the pudding. 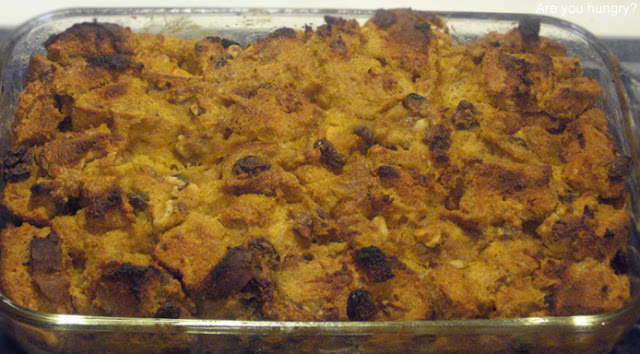 As always, I post the original recipes to honor and respect the originator, with my alterations - like this.

Directions:
Set oven to 350 degrees.
Butter an 11 x 7 inch baking dish. Mine was glass.
In a large bowl whisk together first 7 ingredients to combine.
Fold in bread cubes and raisins and apples.
Transfer the mixture to prepared baking dish.
Let stand for 10-15 minutes for the bread to absorb the mixture.
Bake for about 40-45 minutes, or until done. Baked for 50 minutes
Serve with lots of whipped cream, or caramel topping.

This was a very delicious bread pudding. A bit on the heavy side, as you can imagine however not lacking in the flavor department. The oatmeal bread infused with fresh pumpkin provided a smooth texture while offering a bit of grainy flavor. The sweet, chewy raisins and apple bits added a nice contrast to the overall composition of the dessert. Served with a dollop of whipped cream on top... yummy.

In retrospect, the only things I might have change - I didn't have dark brown sugar. I think the sweetness would have been a bit different, maybe not sweeter, but perhaps a deeper sweet flavor. The other being the caramel topping. Don't get me wrong, the whipped cream was yummy however, I would like to try Claudia's caramel sauce on this. In case you're not familiar Claudia authors What's Cook' Italian Style Cuisine and makes a mean caramel topping.

Finally, a note for the FTC, as a Foodbuzz featured publisher and Tastemaker I received two awesome loaves of bread from Nature’s Pride and Foodbuzz in order to create this awesome dessert. It was yummy and I really enjoyed it, OK?