Even though I’m not a marshmallow fan, these S’more cupcakes looked and sounded so amazing I simply had to try them. Of course, mine were chocolate topped. Perhaps the S’more police would disqualify the cupcakes due to the lack of marshmallow. However in my humble, dessert loving opinion they were just a delicious as any marshmallow topped cupcake.

This recipe, originally from Foodista, was discovered over at BizChickBlogs.com as one of the weekend recipe features. Incidentally, if you have a recipe worthy of a weekend feature, contact Tia, editor in chief via twitter or email letters@bizchickblogs.com.

Preparation
1. Preheat oven to 350 degrees. Line 2 standard muffin tins with cupcake liners; set aside.
2. To make a sheet cake instead, simply grease and flour a large deep cookie sheet.
3. The amazing thing about this cake recipe is that you put all the ingredients in your bowl at the same time. Using a hand mixer, blend the ingredients until well mixed. Do not over blend; a few small lumps are fine.
4. Place graham cracker crumbs, remaining 1/4 cup sugar, and melted butter in a large bowl; stir until well combined.
5. Place 1 tablespoon graham cracker mixture into the bottom of each prepared muffin cup. Use the bottom of a small glass to pack crumbs into the bottom of each cupcake liner. Reserve the remaining graham cracker mixture for topping.
6. Place 2 teaspoons chocolate in each muffin cup. Transfer muffin tins to oven and bake until the edges of the graham cracker mixture is golden, about 5 minutes. Remove from oven and fill each muffin cup three-quarters full with cake batter. Sprinkle each with remaining chocolate and graham cracker mixture.
7. Return to oven and bake, rotating pans halfway through baking, until tops are firm and a cake tester inserted in the center comes out clean, 18 to 20 minutes. Transfer muffin tins to a wire rack and let cupcakes cool in pan for 10 minutes. Remove cupcakes from pan and let cool completely.

DIRECTIONS FOR FROSTING:
1. Beat together 2 egg whites & 1/4 tsp. salt with a mixer until very frothy. Add 1/4 cup sugar very SLOWLY, and beat until smooth & glossy. SLOWLY, add 3/4 Cup light Karo Syrup, & beat until it holds stiff peaks. Gently fold in 1 1/2 tsp. vanilla.
2. Transfer frosting to a large pastry bag fitted with a large plain round or French tip such as Ateco #867 or Ateco #809). Pipe frosting in a spiral motion on each cupcake.
3. Transfer cupcakes to a baking sheet. Using a kitchen torch, lightly brown the frosting, taking care not to burn the cupcake liners. Serve immediately or store in an airtight container, up to 2 days. 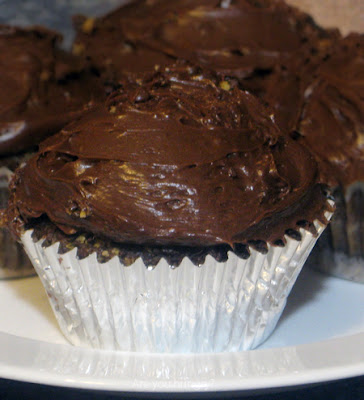 Obviuosly I didn't pipe the frosting, and truth be told it was Betty Crocker ready-made frosting. ** lazy** What can I say, it was the weekend :) Anyway, the graham cracker chocolate bottoms were really unusual, a crunchy S’more experience for sure. The cake was moist and very chocolaty, just the way I like it. My father really, really enjoyed them. He is rather fond of a sweet and crunchy combo. Thanks Tia for introducing this yummy cupcakes!