My dad moved in with us last Memorial Day. Dinner has become an interesting culinary adventure for me. Casseroles are without doubt a favorite of octogenarians, which is someone in their 80's. Serve a ground beef casserole and a homemade dessert like this rice pudding or this minty chocolate pie and you'll likely be considered the best cook in Florida.

The reason behind this casserole preference is chewing and swallowing. Most seniors have false teeth, making chewing for proper swallowing and digestion a real chore. Casseroles make eating an easier task.

Secondly, oftentimes the throat muscles work more slowly. The throat muscles contract and expand in succession, moving the food down the throat in the same way a snake moves its food. In my father’s case, these muscles are weak. Swallowing without thought will induce an uncontrollable coughing attack akin to someone in need of the Heimlich maneuver. Casseroles save everyone’s appetite! 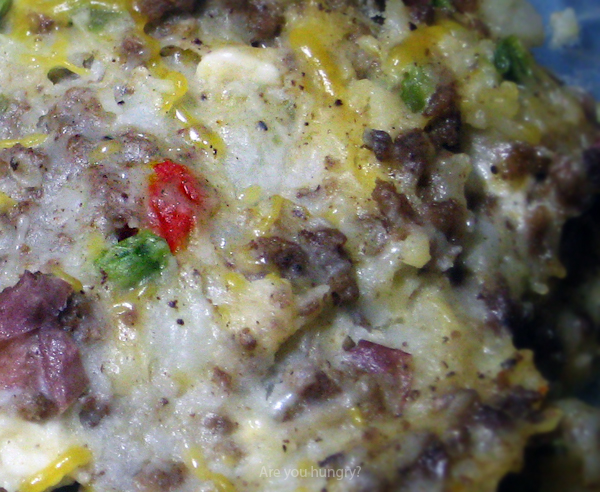 Heat oven to 350°F
In 4-quart saucepan, place potato pieces and add enough water to cover. Heat to boiling; reduce heat to medium-low. Cook uncovered 15 to 20 minutes or until tender.

While the potatoes are cooking, add ground beef to skillet, season with Adobo to taste, as you would with salt & pepper. Cook lean ground beef over medium low heat until beef is no longer pink. Add frozen Sofrito veggies, sprinkle with cilantro, and cook just until thawed.

Drain potatoes completely, removing a portion of the skins is desired. Return to saucepan. Add cream, salt and pepper to potatoes. Mash with potato masher until a few lumps remain. Beat in sour cream and 1/2 cup of shredded mozzarella cheese.

Bake uncovered 10 to 15 minutes or until thoroughly heated and cheese is melted. 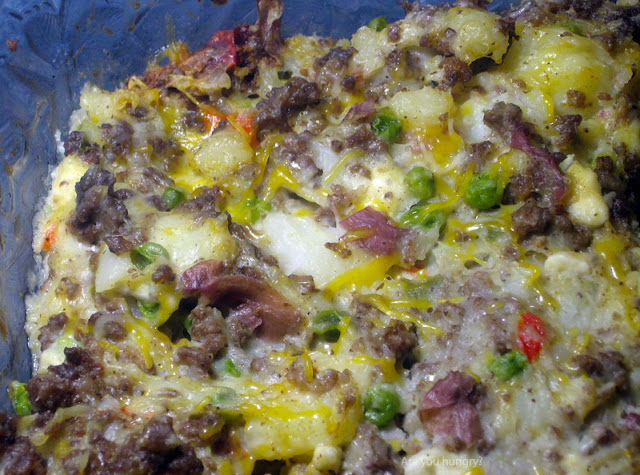 This red potato and ground beef casserole didn’t need many spices to be flavorful and was by no means bland. The pieces of red skin and potato chunks present a composition similar to loaded baked potatoes, while the ground beef and sofrito added texture. The red and green peppers were influential, adding fresh bell pepper flavor even though they were frozen. The combination of cheeses along with both sour and light creams made this casserole rich. Very rich. My father enjoyed this casserole so much he requested it for dinner the next night as well!

To Taste Notes: I added about four or five sprinkles bit black pepper to the potatoes for a bit of zing. That’s how I prefer my mashed potatoes anyway. I added about two sprinkles of Adobo to the meat mixture. Take care shaking the Adobo; it always comes out of the jar fast!