Pork loin is an economical and healthy cut of pork. Being as such, I often purchase whole pork loins for added savings, which are generally 9 – 10 lbs, and divide before freezing. Upon scripting this pork loin recipe, five pork loin roasts were in the freezer.

The North Carolina Pork council addresses the question of fats in pork:

How does pork compare to other meats for fat, calories, and cholesterol?

"Pork today compares favorably for fat, calories, and cholesterol with many other meats and poultry. Many cuts of pork are as lean or leaner than chicken and meet the government guidelines for “lean” or “extra lean.” Any cuts from the loin - like pork chops and pork roast - are leaner than skinless chicken thigh, according to U.S. Department of Agriculture data. Pork steaks or roasts from the leg ("fresh ham") are also lean choices."


My initial recipe thought was a stuffed pork loin, devoid of a long and complicated process. Are You Hungry demonstrates my style - the not being fond of a complicated method - and I admit to seeking and utilizing the easiest means to prepare a delicious meal. Is an easy stuffed pork loin even possible?

This video provided clear instruction for preparing the pork loin for stuffing. The method was relatively easy. Cutting around the first curve was the most difficult part however the pork filet turned out relatively flush considering it was my first attempt.

After carving was complete, I prepared the stuffing using a stuffing premix and adapted the directions just a bit. Combine the seasoned bread cubes, butter, and 2/3 of the required water in a large bowl. Microwave 1 minute. Add to the stuffing 1-cup of thawed and well-drained greens, I used mustard greens. Toss to mix. Add 1/4 cup grated Parmesan cheese and mix well. Heat for about another minute in the microwave to help ingredients stick together.

Season the pork with salt, pepper, and rosemary. Spread a layer of stuffing over the pork about a half an inch thick. 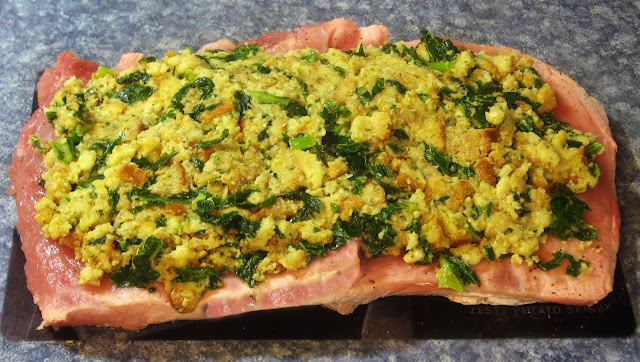 Gently roll the pork being careful not to make the roll tight enough to squeeze out the stuffing. Start at one end, wrapping string around the roast to secure the roll, knotting each revolution, until the roast is secured. Running out of kitchen string, I skewered the pork loin from end to end. **sad face** 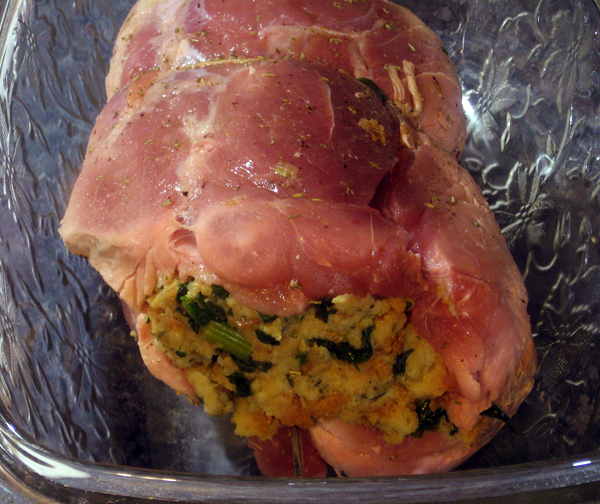 Sprinkle the stiffed pro loin with rosemary and black pepper. Bake at 350 until roast is cooked to an internal temperature of 160. My roast took just about an hour to cook.

The whole meal took about an hour and half to prepare. Tender and juicy, the guys simply loved it. Dad doesn’t even like greens, yet truly enjoyed the stuffing. The greens added a nice color and flavor to the stuffing while the parmesan cheese offered just the right amount of sharp cheesy bite. 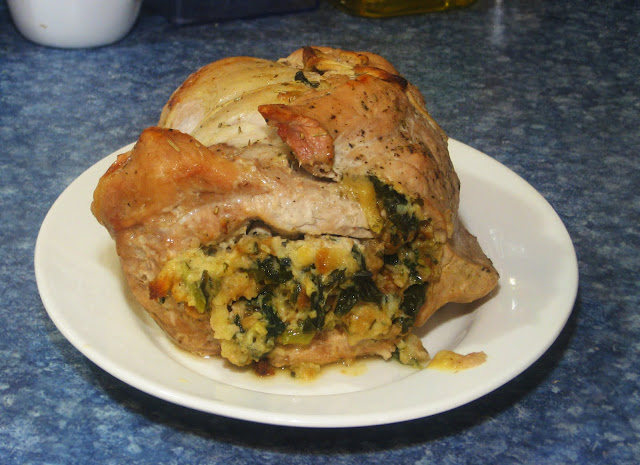 Simply, fast, and oh so tasty, this stuffed pork loin recipe is perfect for a busy mom on a tight budget.