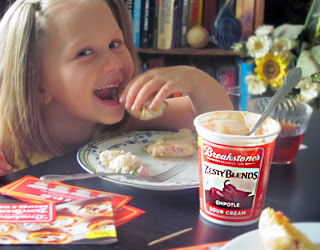 Being an enthusiast of spicy and Latin flavors, I was delighted when presented with an opportunity to sample and share Breakstone’s new flavored sour creams. I’m sure my family and friends laughed receiving an invitation to a spicy sour cream house party. I know I would have.
Breakstone’s new Zesty Blends sour creams are available in 3 flavors, Chipotle, Roasted Garlic & Herb, and Jalapeno. Of the three sour cream flavors the roasted garlic and herb is the strongest flavor and tasted least like sour cream. In fact, one would not know it was sour cream if it weren’t for the label. The flavor was good but overpowering; therefore, I think it works best in Italian style recipes such as pasta salads, dips, and dressings when used sparingly. My guest agreed the Chipotle and jalapeno were about tied as far as flavor went. The traditional chipotle flavor was a bit stronger offering just a hint of sour cream flavor whereas the jalapeno was definitely sour cream being enhanced by bits of jalapenos. Both of these can easily be substituted when sour cream is used as a topping or as a recipe ingredient. The chipotle was my favorite of the three sour cream flavors.
The party food included load your own ham and cheese potato skins with all the fixings on the side, a variety of wraps filled with ham, smoked turkey, cheese, and veggies with chipotle or jalapeno sour cream, and a roasted garlic and herb pasta salad. You can visit my house party here. 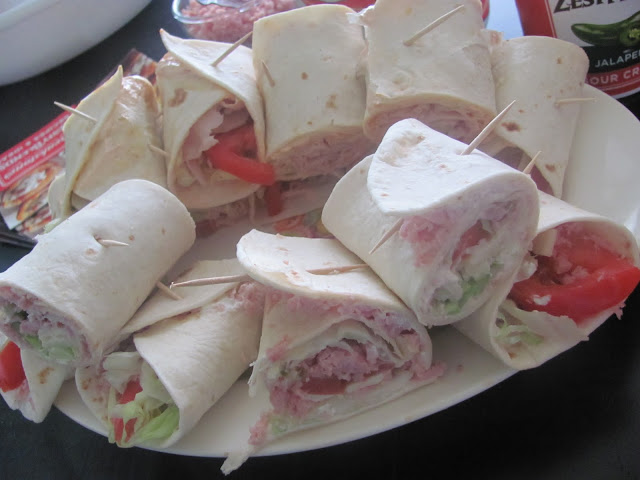 Since the party, I have adapted and developed a few favorite recipes with great success by substituting Chipotle sour cream in this Burrito Bake, my three cheese loaded beef and potato casserole, and this seafood salad . The newest salad creation was a ham and avocado salad. Not fond of ham salad, Hubby initially requested an alternative for dinner. However, after a moment of thought and a puzzled puppy look from me, he agreed to try it. I’m happy to report he was pleasantly pleased with his decision. In the near future, I’ll share a creamy chicken and potato recipe that turn out delicious.
Roasted Garlic and Herb Pasta Salad
8 oz medium shells (about ½ box) cook as directed
1 cup diced Hormel ham
1 cup frozen peas, thawed
2 plum tomatoes
1 cup chopped cucumber
¼ cup light mayo
3 Tbsp Breakstone’s Roasted Garlic & Herb Sour Cream
1 tsp lemon
1-3 Tbsp milk as needed
Salt and pepper to taste
Cook the pasta according to directions on the package. Drain well and allow cooling. Set out the peas to thaw. Meanwhile chop or dice the vegetables and the ham. In a small bowl, combine the mayo, sour cream, and lemon juice mix well. When the pasta is complete cooled, season with salt and pepper, and then add the ham and veggies to the pasta. Toss lightly. Add the dressing and mix well. Add the milk a little at a time as needed to integrate the dressing. Chill completely before serving. 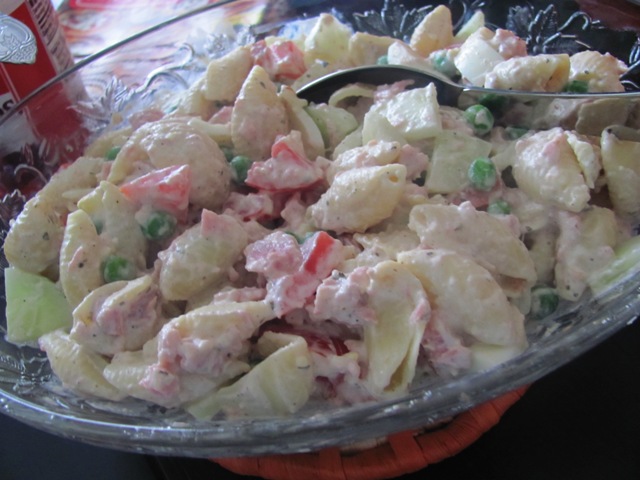 Because this sour cream flavor is so strong, there is really no need for additional seasonings. My guests unanimously agreed.
Ham and Avocado Salad
2 cups minced Hormel ham
1 ripe Haas avocado
4 Tbsp light mayo
3 Tbsp Jalapeno Sour Cream
¼ tsp dry mustard
1 tsp limejuice
Black pepper to taste
Cut ham in chunks and process to mince. Pour ham into a mixing bowl and set aside. Process the avocado until creamy. Add the limejuice and pulse a few times to mix. Add the mayo, sour cream, and mustard then pulse until completely blended. Sprinkle the ham with black pepper and fold in the avocado mixture. Blend completely, taste adding more pepper as needed. Chill until ready to serve.
I served this ham salad on toasted whole grain buns with shredded lettuce and thin cucumber slices. This salad is definitely a keeper. Sorry no photo, just close your eyes and try to imagine a whole grain bun piled high with zesty ham salad!
If you have opportunity sample these flavored sour creams. The recipe uses and options are endless. 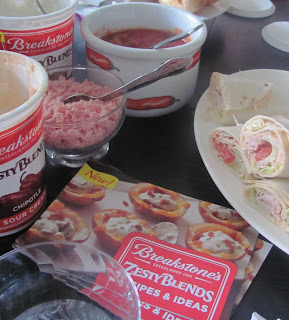