With autumn fast approaching, food bloggers are presenting fall inspired recipes in massive quantities.  temperatures are still in the low 90s, hardly the fall weather most are experiencing. It's a bit less humid and dusk arrives sooner proving fall is coming straight away. So last night I decided to bake something in honor of the fall approach as well as to finish the Kelapo Coconut Oil review.

This coconut oil really rocks let me tell you. It is fabulous for baking, providing grand moisture properties and a coconut flavor. I experimented with an old-fashioned cast iron skillet pineapple upside down cake recipe on several occasions. With the first baking, coconut oil replaced the shortening. This resulted in a hint of coconut flavor that prominent with first bite, then blended with the pineapple flavor, suggesting an overall tropical tone.  The second cake, I got brave and substituted the melted butter too. Now that one was a rich and seriously laden coconut flavored cake.

The coconut oil also provides a nice twist for our favorite sweet and spicy chicken stir-fry. Rather than using sesame oil and finishing with the seeds, I substituted Kelapo Coconut Oil and toasted coconut. OMG it was amazing!

The nearly fall weather and a chocolate / coffee desire prompted my final experiment. Perhaps I could have eaten a candy bar and drank a cup of coffee or brewed the remainder of the Godiva Chocolatier flavored coffee however, the craving involved cake. Imagine that, me craving cake, no.

Mr. Google helped me solve the dilemma.  I decided on a Chocolate Coffee Bundt Cake with a Coffee Glaze. The original Chocolate Bundt Cake recipe was adapted from group recipes and the glaze from Nicole @ bakingbites.com.

Preheat the oven to 350. In a large mixing bowl, whisk together the first eight ingredients. Add eggs, coffee, buttermilk, coconut oil, and vanilla. Beat with a hand or table mixer at medium speed for 2 minutes. Batter will be relatively thin.
Pour into a greased and floured 10" bundt or fluted baking pan. Bake at 350 for 35-45 minutes, or until a toothpick comes out clean. Mine took exactly 35 minutes.

Let cool in pan 10 minutes before removing from pan to a wire rack to cool completely.
When cool prepare the desired glaze and drizzle over the cake top, or dust with powdered sugar.

To make the Glaze: 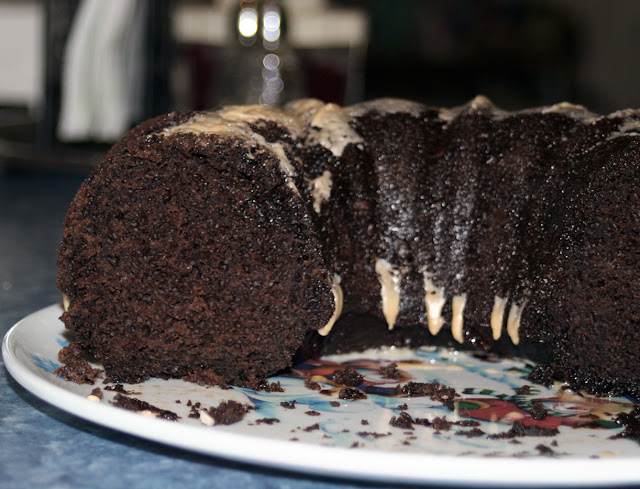 Final Thoughts
The cake was very light and airy in addition to being exceptionally moist. In fact, it looked and felt so moist prior to cutting; I expected it to be dense. The coffee flavor was unmistakable. The French Vanilla Coffee in combination with the cocoa and a hint of coconut from the oil produced an extremely rich, deep flavor. I do believe this is the best chocolate cake I ever baked!

The glaze added just the right coffee flavor finish and set up nicely however it was very messy. While Nicole’s glazing photo looked as mine did while glazing, much of my glaze disappeared after setting. The cake was completely cooled. Perhaps I shouldn’t have used that hand mixer. Either way, it was the perfect flavor pairing for this cake, thanks Nicole!

As promised, I have a discount code for my faithful, coconut loving readers. The code is RedKathy (case sensitive) and gives you 20% off an order at kelapo.com. The code is valid through 10/9/2011.

You can learn more about Kelapo Coconut Oil on FaceBook or visit www.WeAreCoconuts.com for more coconut oil recipes and information.