Is it a Galette or a Crostata?  Regardless of the name, these fruit layered desserts are scrumptious by all measures.  The combination of apple and cranberry formulate the best Galette - Crostata filling in my opinion.

"More often than not, despite the fact that it can refer to a number of different baked goods, the term galette typically refers to a free form tart that is made with a flaky pastry crust." Baking Bites 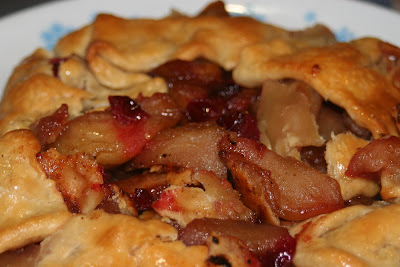 "As a form of tart that hails from Italy, the crostata cane be prepared with a variety of fruit fillings and made into any size that the cook desires." WiseGeek

Although “Are You Hungry?” has been nearly uninhabited the last few months, I have been cooking and baking. My real comfort in troubled times. Being of the “self taught” foodie classification, I thought a bit of Google research would help to facilitate a title. Yeah well regardless of selecting Galette or Crostata this dessert is delicious!


The original recipe was posted by a fellow Floridian at Just a Pinch.com. I've prepared the recipe exactly as written three or four times. The only adjustment I made was brushing the crust with honey. This is an easy, not too sweet, and incredibly comforting dessert.

In a skillet, melt butter over medium heat. In a bowl, place apple slices and add cinnamon, nutmeg, ginger, and brown sugar. Toss and add to skillet.

Cook for 10 minutes and then stir in cranberries. Cranberries will pop when heated through. Cook until liquid cooks down and apples are tender.

Unroll pie crust onto prepared pan, spread so it makes an uneven circle. Spoon prepared apples into center of crust and fold in sides loosely and unevenly. 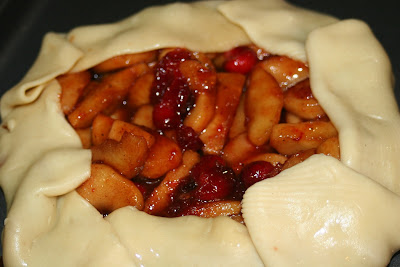 Bake in preheated for 12-15 minutes or until crust is golden brown and flaky.


The original recipe suggested the option of sprinkling the crust with granulated sugar. This is where I brushed with honey. Local Florida Orange Blossom Honey. YUM!! 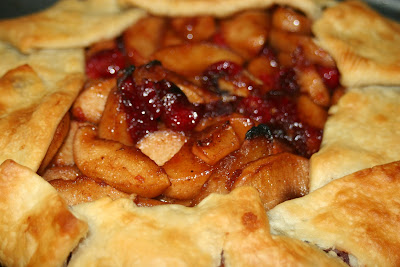 Thank you for the continued kind words and prayers for my Dad. After another visit to the hospital due to pneumonia and a bout of C Diff in rehab, we think he's finally on the road to recovery.